Employment Information on Pinterest
Check out the Pinterest page on employment.
10 Overused Words You Should Never Put on Your Resume
Alison Griswold (photo, left) presents an article based on LinkedIn's list of the ten most overused words on resumes.
Chapter 15. Find inspiration in these creative résumés
We write a lot about resumes — what to do, and what not to do.
Chapter 15. See how an applicant tracking system handles your résumé
View original content
Chapter 15. Learn to use LinkedIn’s résumé builder
That resource is no longer available, but here is advice on creating a compelling LinkedIn profile.
Top 9 Resume Mistakes to Avoid
Matt Johnston (photo, left) presents a video on the topic of resume mistakes to avoid.
The Modern History of the Resume
While the look and feel of the resume has been quite constant for most of modern history, the resume has recently been turned on its head to including infographic, video and social media options.
The Modern History of the Resume 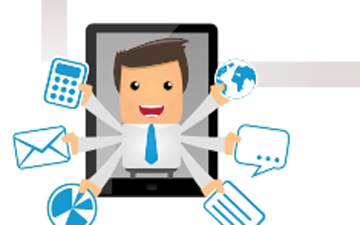 10 Steps to Score Your Dream Job on Facebook
Facebook is not what typically pops to mind when job seekers launch their search for employment.
Bombarding an Employer with Unsolicited Recommendations Can Backfire
Here’s something that happened recently when I was hiring for an open position: A candidate emailed her resume and cover letter to me.
HR Execs Reveal the 13 Most Common Resume Blunders
In today's weak job market, it's more important than ever to make your resume stand out.
13 Insanely Cool Resumes That Landed Interviews at Google and Other Top Jobs
One looks like a movie poster.
10 Tools You Need to Land Your Dream Job
You've spent hours crafting the perfect resume.
Is My Parents’ Advice Destroying My Job Search?
What should a young job applicant do when well meaning parents are giving advice that worked for them in their job searches?
How to Maximize Facebook to Find Employment
.
Creative Cover Letters: Personality, Pitch and Professionalism
What can you do to stand out in today’s market?
7 Ingenious Resumes That Will Make You Rethink Your CV
You love resumes.
How Your Embarrassing Job-Threatening Facebook Photos Are Part of Your Application
.
The Ten Worst Things to Put in Your Cover Letter
It's never too early to make a bad impression.
One Resume Change That Will Significantly Increase Your Results
Toss out that passé Objective section of yesterday and replace it with a well-branded, focused statement that gives the reader a clear message about who you are in less than 5 words.
Should You Send a Rejection Letter?
[Today's job seekers] are not only competing with hundreds of other professionals for every open position, but they’re also bombarded with tons of career advice from every angle telling them what to do (and what not to do) in order to land their next job.
5 Ways to Win a New Job Using LinkedIn!
Are you wondering why everyone in the business world is so agog over LinkedIn?
How Companies Use Facebook to Hire and Fire Employees (Infographic)
In an increasingly digitized world, roughly 45 percent of employers now reportedly use social media sites like Facebook, LinkedIn, and Twitter to screen potential employees, according to Mindflash.
LinkedIn and How It Can Benefit You
In this excerpt from her recent talk at the University of Applied Sciences & Arts in Lucerne, Switzerland, strategist Dorie Clark (photo left) discusses LinkedIn and how every professional should be deploying it.
The 15 Wackiest Things People Have Listed on Their Resumes
Given that 45 percent of human resources managers say they spend less than a minute, on average, on each job application they see, it’s understandable that some people might go overboard in trying to bring some individuality to their work history.